Most public functionaries in Abia State are currently on the run or in hiding following a daring order by the leadership of the Indigenous People of Biafra (IPOB) to get Governor Okezie Ikpeazu arrested.

IPOB Leader, Nnamdi Kanu, ordered Abia youths to fish out for Governor Ikpeazu and get him arrested to face trial for allegedly being complicit in the killing of protesting Abia youths.

This is coming as thick dark smoke drilled the skyline of Aba, the commercial heartbeat of the state in Eastern Nigeria till Thursday, following clashes between security forces and suspected hoodlums.

Trouble started on Tuesday, and escalated on Wednesday, as reports of casualties from clashes with security forces sparked anger among residents of the busy commercial city. 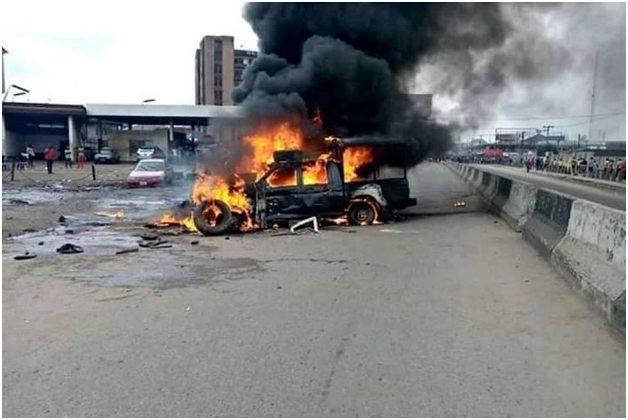 Eye-witnesses say banks located around the New Market (Ahia-Ohuru) were vandalised by the angry mob. One of the rioters was allegedly shot dead by the police at Ndiegoro. Enyimba Mall Outlet Shops at Etche Road was set ablaze.

According to our sources, the irate mob tried to attack the Ndiegoro Police Division (Cameroon Barracks), but were confronted by heavily armed security forces that allegedly led to the death of another protesting citizen.

While the rampaging Aba youths were having a field day, it seems the 24-hour curfew imposed on the restive city by Governor Okezie Ikpeazu, did not deter the rioters.

Hundreds of residents congregated in parts of the commercial town to register their displeasure over the killing of innocent citizens by security forces in the country.

Areas such as Umuojima, Ariaria Junction and Asa Road and many others witnessed a wild cat protest, an indication that the curfew was not adhered to by the boiling Aba residents.

While there was a heavy presence of security operatives at some sensitive facilities, including the Aba Prison, hoodlums ransacked the streets, vandalising government property and looting them.

A swift intervention of combined security forces saved Azuka Eziama Divisional Police Officers from being abducted by the mob.

Insiders say the Enyimba Mall, still under construction was hit on the suspicion that it belongs to Governor Ikpeazu. Those who attacked the mall were said to be chanting the governor’s name vowing that they will never forgive him.

Youths protesters in Aba on Wednesday

But, the Enyimba Mall Outlet Shops is said to be the property of Checkbest International Limited owned by Chiedozie Njoku. At the time the mall was attacked, the governor’s photograph was on a billboard in front of the mall.

Another eye-witness said the Aba Area Command Headquarters of the Nigeria Police looked like a war zone, as every officer on duty was allegedly shooting in the air to scare any possible attacker who may dare to come near.

Governor Ikpeazu however, said he imposed curfew because the protest was hijacked by criminal elements as a means to foment trouble, endanger lives and damage public property.

“A situation where a policeman will be killed, police stations attacked and burnt down with other harm to government infrastructure, is sadly outside the realm of acceptable conduct in the cause of a protest. Citizens have become apprehensive with clear and present danger to the lives of Ndi Abia and no responsible government will sit back and allow this state of affairs to continue.

“Over the last five years, we have managed to keep Abia State very peaceful through the instrumentality of security agencies working in concert with the Government and the citizenry and we intend to take all legitimate steps to safeguard the peace and security of the State and its inhabitants.

“We are not unmindful of the fact that some people are not happy with the peaceful atmosphere in the state and will seek any available means to foment trouble for their nefarious and political ends but we will continue to frustrate their efforts at every turn.

“As a response to the initial demands of the protesters, we have set up a Judicial Panel of Inquiry chaired by the former Chief Judge of Abia, Justice S.N. Imo with 70% of the membership made up of youths and those familiar with the situation. We are awaiting their report and I pledge to work with relevant agencies to ensure full implementation.

“Furthermore, the state government has provided a cash reward for any individual with incontrovertible evidence of police brutality and high-handedness that will help the Panel with its assignment.

“We have also announced a cash reward for those who will give us information about the criminal elements who carted away the arms and ammunition of Police Officers who were attacked in Aba yesterday.

“In addition to the above, let me assure our people that we are prepared to accept, and inappropriate cases, grant audience physically to all those who wish to bring forward documented cases of police brutality in Abia.

“Once we get indications from such persons, we shall open our doors and listen directly, provided such persons undertake to behave decently and responsibly. We commit to presenting these documented cases at the highest level in the country”, the governor said.

Meanwhile, local sources say there is tension in Government House, Umuahia, since Wednesday, when the arrest directive was given.

Kanu on Wednesday allegedly told his members to “capture” Governor Ikpeazu, to face trial for the alleged role he played in the killing of EndSARS protesters in the state.

In a statement the IPOB leader personally signed, he ordered that Ikpeazu must be apprehended anywhere he was sighted. “Okezie Ikpeazu is in Asaga village Ohafia. He is hiding in the house of his Chief of Staff, one Ukpai Agwu Ukpai.

“Our youths in Ohafia are hereby instructed to capture him alive to face trial for the numerous murders he committed including the death of protesters on Tuesday in Aba. On no account must he be allowed to leave Ohafia alive. It’s an order.”

He has urged the EndSARS protesters not to give up, claiming “the oppressors will try every option including shooting to quell the protest, but nobody should be deterred.

“We call on every youth, man and woman to join the protests now. This is the time everybody should identify with this movement to rescue our collective future and destiny from suffocation.”

IPOB, A Reflection Of Igbos’ Collective Predicament In Nigeria- Ohaneze